The customs in Bhutan
Home / News

The customs in Bhutan

The customs in Bhutan

Bhutan is a sparsely populated country bordered by India to the south and China to the north. Bhutan has long pursued a strict policy of isolationism, both culturally and economically, with the aim of preserving its cultural heritage and independence. The unique local customs of Bhutan include the following aspects.

Men wear heavy knee-length robes, tied with a belt, called a gho, folded so that a pocket is formed in front of the belly.

Women wear colorful shirts over which a large rectangle of cloth called a "Kira" is folded and buttoned to create an ankle-length dress. A short silk jacket, or toego can be worn over the Kira. Every day gho and kira are either cotton or wool, and the patterns are simple checks and earth-colored stripes depending on the season. Silk kira in colorful patterns and the rarer gho can be worn on special occasions and festivals.

Additional rules of etiquette apply when visiting dzongs or temples, or appearing in the presence of high-ranking officials. Ordinary men wear a white kabney from the left shoulder to the opposite hip. Local and regional elected officials, government ministers, cabinet members, and the king himself all wear kabni in their respective colors. The women wear a narrow embroidered cloth called lacho over the left shoulder. 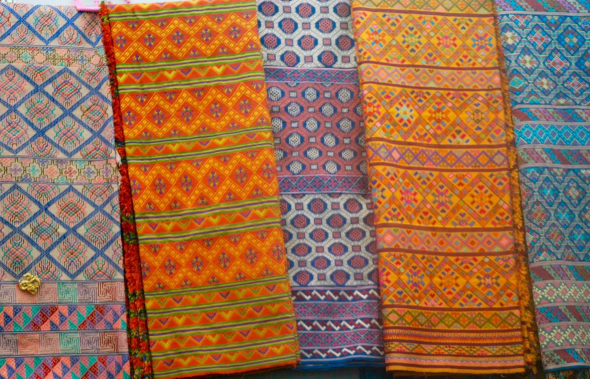 Marriage is decided by either party, and divorce is not uncommon. The wedding ceremony includes exchanging white scarves and sharing a cup. When the couple has lived together for more than six months, the marriage can be officially registered. Traditionally, the groom moves to the bride's maiden family (matrilineal area), but newlyweds may decide which home to live in based on which family needs the most labor.

In Asia, Bhutan is an unusual exception, where dowry customs do not exist; inheritance is matrilineal, and daughters are not born with the father's surname, nor are they married with the husband's surname. Rural land can be registered in women's names. Women own their own businesses, both polyandry and polygamy are socially acceptable, and polygamy is more common.

In 1980, the Marriage Law was promulgated, implementing monogamy and prohibiting polygamy and child marriage.

The staple foods of Bhutan are red rice, buckwheat, and, increasingly, corn. The mountain diet also includes chicken, yak meat, beef jerky, pork, lard, and lamb. Soups and stews, rice, ferns, lentils, and dried vegetables, with peppers and cheese, are a favorite cold-season meal. When someone offers you food, you say meshu meshu, rejecting it by covering your mouth with your hand as Bhutanese custom, and then giving in the second or third time.

Since 2013, we have been arranging both private & customized Bhutan trips for our clients from all over the world.

We can also do Tibet-Nepal-Bhutan-India trips if you want to add more destinations to your Bhutan tour. Aiming at providing the best Bhutan tour service at the most reasonable cost, we guarantee that we will present you with a worry-free, unforgettable and unique Bhutan journey once in your lifetime.

Discover the Mystery of Bhutan with Us!

Save your money+Provide best service

Why is Polycarboxylate Superplasticizer Modified?…

The prices of chemical raw materials in the manufacturing industry increased by 16.3% had an impact on the prices of mould release wax fibreglass…

What is spherical silica powder used for?…

How to produce titanium nitride?…

Erbium oxide Er2O3 powder is a pink powder with the chemical formula Er2O3, mainly used as an additive for yttrium iron garnet and a control material for nuclear reactors.…

Iron disilicide is an inorganic silicon compound with a molecular formula of FeSi2 and a molecular weight of 119.975. It is a gray powder, odorless, tetragonal crystals. For hydrogen catalytic oxidation and methanation catalyst.…